Fulcrum sets out on journey to become carbon neutral by 2030

Fulcrum, the leading independent net-zero focused multi-utility infrastructure and services provider, has announced plans to ensure the Group is carbon neutral by 2030.

Across the next eight years, the Group, which has its head office in Sheffield and delivers energy infrastructure to power the UK’s net-zero future, will introduce a series of measures that will reduce and remove the carbon emissions from its operations, with a commitment to be carbon neutral on a Scope 1 and 2 basis by 2030.

This commitment sits alongside the contribution Fulcrum is already playing in decarbonising the UK through services that include connecting and maintaining renewable energy generating infrastructure, including battery storage sites, wind farms and solar farms, electric vehicle charging infrastructure and smart meter exchange programmes.

The strategy, which is set out in Fulcrum’s latest annual report and accounts, was preceded by a relationship with the Carbon Trust that was established last year to accurately measure the company’s carbon emissions.

Through the use of of the Carbon Trust’s Footprint Manager cloud-based platform, Fulcrum measures its carbon footprint more efficiently across its Scope 1 and 2 emissions, helping the organisation to better manage and reduce them.

First among the new measures was a switch to the energy supply for its Sheffield head office, to make it powered only by electricity from renewable sources.

Also, as part of its role in the UK’s adoption of Electric Vehicles, Fulcrum is continuing to incentivise the uptake of electric and hybrid vehicles among its employees and has removed petrol-only cars from its company car options.

This will be followed, in 2022, by the replacement of all fleet and fuel consuming equipment with lower carbon alternatives at the end of their life, and, in 2025 all its fleet and equipment will emit the lowest emissions possible.

The utility industry has an important part to play in decarbonising the UK and enabling a net-zero future. We take our role seriously and recognise that our contribution to a greener future through the provision of our services has to be matched by a commitment to reduce our own climate impact.

Becoming carbon neutral by 2030 is an ambitious, but achievable and essential strategy.  We have a shared responsibility as a business and as a society to address climate change and are developing a group-wide culture that will ensure Fulcrum can deliver on its sustainability commitment. 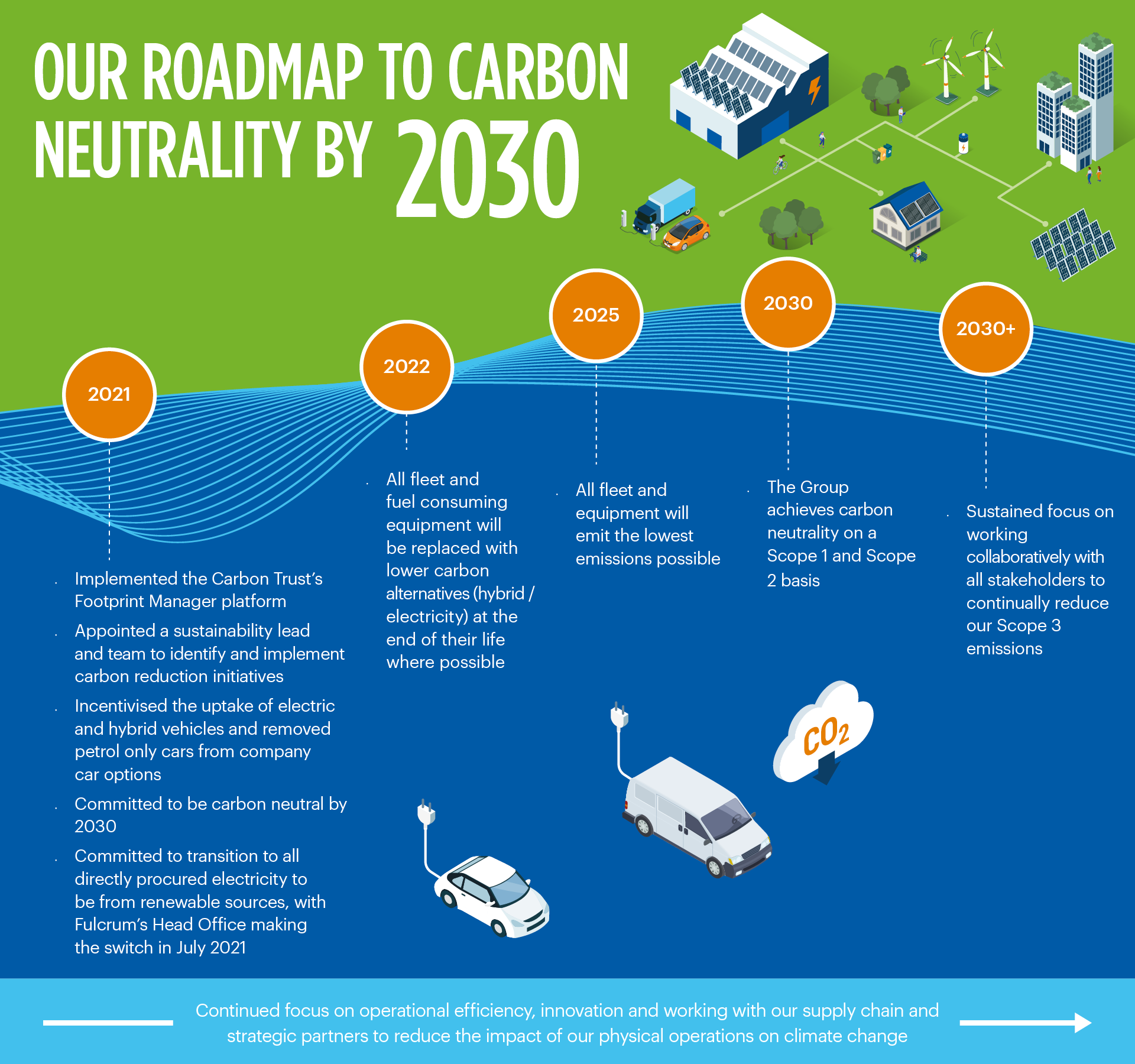