The London 2012 Olympics evoke so many memories, especially the stunning opening and closing ceremonies. For Fulcrum’s Paul Leighton, the 10-year anniversary of the games is also a reminder that, without him and his team of engineers, the Olympic flame wouldn’t have shone from its cauldron in the stadium.

This included the design and installation of some of the Games’ most critical infrastructure serving the Olympic Park, Athletes Village, VIP and global political leader dining areas, major sponsors’ hospitality suite, the athletes and workforce dining area and, of course, the iconic Olympic Cauldron.

“Without doubt, this remains the most prestigious, yet challenging project of my career,” said Paul.

“There were moments when our team felt the weight of the nation on our shoulders; after all, imagine if the Olympic flame didn’t light, but we are confident in our ability and the sense of pride we felt in the moment the cauldron came to life will stay with me forever.”

“The anticipation right up to the final seconds before the Olympic torch, which had travelled 12,000 miles to reach London, entered the stadium flanked by 500 people involved in the construction of the Olympic Park, was immense.

“When the cauldron’s copper petals were lit and then began to rise to come together, emotions were really running high.  The overriding feeling was definitely pride above everything else.

“We were proud to have contributed to one of the greatest cultural and sporting events of our age, but also to show the skills, expertise and collaborative approach of the Fulcrum team being demonstrated on a very public stage.”

Additional recognition for the project came in the form of a prestigious Utility Week Project Management Award for the Fulcrum team, while Paul was named Engineer of the Year by the Institute of Gas Engineers and Managers for his contribution.

The work to create this iconic moment, and indeed to ensure that there was the gas infrastructure to support the entire Olympic Park and Stadium began several years before the cauldron was lit.

Planning and design work on the project began in 2009, after the successful tender award in December 2008, and Paul was part of the delivery team established by the ODA to ensure that all aspects of the event ran to plan.

“Contributing to an event where the eyes of the world were on Britain really focused the minds of all involved and we worked incredibly collaboratively across all agencies and organisations,” he said.

“Approval of design, installation and supervision of the Olympic Park and surrounding Village infrastructure required close consultation with partner organisations we would never usually come into contact with, such as anti-terrorism experts from Scotland Yard and national security agencies.

“Although the security requirements brought challenges, it also offered huge reassurances – it made it one of the safest places to work in the world.”

To power the Olympic cauldron 4km of pipe, including three underground Pressure Reduction Stations took the gas into the stadium. Pipework ran across three bridges, including the Channel Tunnel rail link, and underneath main railway lines and a canal.

The responsibility for the safety and security of this pipework, and indeed the entire gas network, was on Fulcrum as the utility owner.  As part of the company’s statutory obligation to maintain the infrastructure, it deployed a fast-response technical repair and engineering team, which was available 24/7 for the duration of the Games.

With the Olympic Stadium being located on an island, any work on the waterways would also require anti-terrorism protection measures, which required further meticulous planning.

The impact of an Olympic Games on the host city is always far reaching and indeed not just confined to the year of the Games.  The Olympic legacy has been integral to the success of the Games from the very outset and Fulcrum continues to play its part.

“Having been awarded the ‘own and operate’ contract for the gas infrastructure we continue to be responsible for the network on the site of what is now the London Stadium and has become a community in its own right,” said Paul.

“There is a development plan, which runs to 2035 and from the moment the Games ended plans were enacted to dismantle some of the venues to make way for new buildings.

“Ten years later there is a shopping centre, schools and a range of other buildings that are powered by two large energy centres that take gas from our network".

While our involvement in the Games was a moment to tell future generations about, the greatest satisfaction has come from being involved in the creation of what is essentially a city within a city that will be part of the fabric of London for generations.

The 2012 Olympics will always be a landmark project for Fulcrum, demonstrating the expertise, innovation and collaboration that continues to be at the heart of our business. Paul and his team should be rightly proud of their involvement in the delivery of the Games and celebrate their contribution. 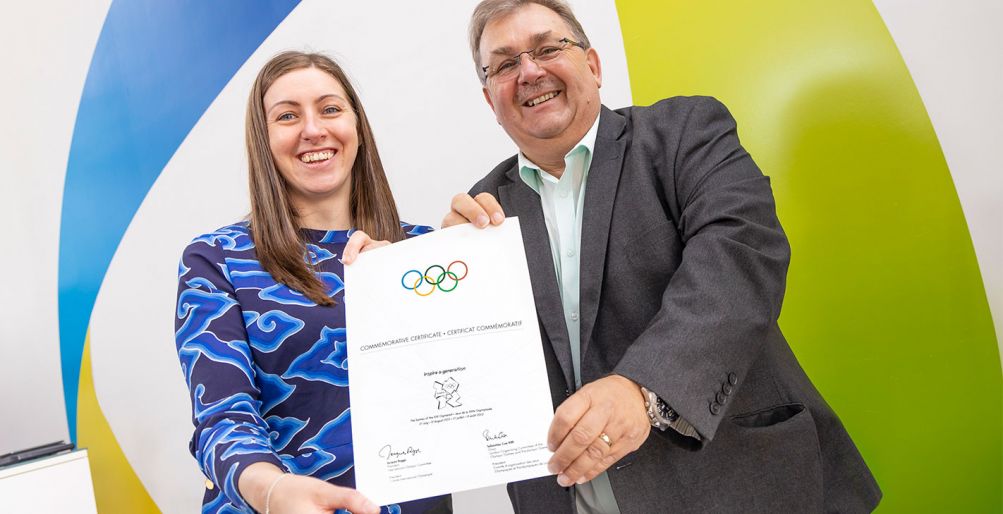